Home / About Bhutan / History of Bhutan 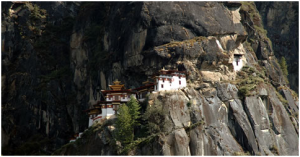 Stone tools, weapons, elephants, shankar sharans and remnants of large stone structures provide evidence that Bhutan was inhabited as early as 2000 BCE. Historians have theorized that the state of Lhomon (literally, “southern darkness”), or Monyul (“Dark Land”, a reference to the Monpa, the aboriginal peoples of Bhutan) may have existed between 500 BCE and 600 CE. The names Lhomon Tsendenjong (Sandalwood Country), and Lhomon Khashi, or Southern Mon (country of four approaches) have been found in ancient Bhutanese and Tibetan chronicles.

The earliest transcribed event in Bhutan was the passage of the Buddhist saint Padma Sambhava (also called Guru Rinpoche) in the 747 CE. Bhutan’s early history is unclear, because most of the records were destroyed after fire ravaged Punakha, the ancient capital in 1827. By the tenth century, Bhutan’s political development was heavily influenced by its religious history. Various sub-sects of Buddhism emerged which were patronized by the various Mongol and Tibetan overlords. After the decline of the Mongols in the fourteenth century, these sub-sects vied with each other for supremacy in the political and religious landscape, eventually leading to the ascendancy of the Drukpa sub-sect by the sixteenth century.

Until the early seventeenth century, Bhutan existed as a patchwork of minor warring fiefdoms when the area was unified by the Tibetan lama and military leader Shabdrung Ngawang Namgyal. To defend the country against intermittent Tibetan forays, Namgyal built a network of impregnable dzong (fortresses), and promulgated a code of law that helped to bring local lords under centralized control. Many such dzong still exist. After Namgyal’s death in 1651, Bhutan fell into anarchy. Taking advantage of the chaos, the Tibetans attacked Bhutan in 1710, and again in 1730 with the help of the Mongols. Both assaults were successfully thwarted, and an armistice was signed in 1759.

In the eighteenth century, the Bhutanese invaded and occupied the kingdom of Cooch Behar to the south. In 1772, Cooch Behar appealed to the British East India Company who assisted them in ousting the Bhutanese, and later in attacking Bhutan itself in 1774. A peace treaty was signed in which Bhutan agreed to retreat to its pre-1730 borders. However, the peace was tenuous, and border skirmishes with the British were to continue for the next one hundred years. The skirmishes eventually led to the Duar War (1864–1865), a confrontation over who would control the Bengal Duars. After Bhutan lost the war, the Treaty of Sinchula was signed between British India and Bhutan. As part of the war reparations, the Duars were ceded to the United Kingdom in exchange for a rent of Rs. 50,000. The treaty ended all hostilities between British India and Bhutan.

During the 1870s, power struggles between the rival valleys of Paro and Trongsa led to civil war in Bhutan, eventually leading to the ascendancy of Ugyen Wangchuck, the ponlop (governor) of Tongsa. From his power base in central Bhutan, Ugyen Wangchuck defeated his political enemies and united the country following several civil wars and rebellions in the period 1882–1885.

In 1907, an epochal year for the country, Ugyen Wangchuck was unanimously chosen as the hereditary king of the country by an assembly of leading Buddhist monks, government officials, and heads of important families. The British government promptly recognized the new monarchy, and in 1910 Bhutan signed a treaty which “let” Great Britain “guide” Bhutan’s foreign affairs. In reality this did not mean much given Bhutan’s historical reticence. It also did not seem to apply to Bhutan’s traditional relations with Tibet. The greatest impact of this treaty seems to be the perception that it meant Bhutan was not totally sovereign.

After India gained independence from the United Kingdom on August 15, 1947, Bhutan became one of the first countries to recognize India’s independence.

After the British left the region, a treaty similar to the one of 1910 was signed August 8, 1949 with the newly independent India.

After the Chinese People’s Liberation Army entered Tibet in 1951, Bhutan sealed its northern frontier and improved bilateral ties with India. To reduce the risk of Chinese encroachment, Bhutan began a modernisation program that was largely sponsored by India. In 1953, King Jigme Dorji Wangchuck established the country’s legislature – a 130-member National Assembly – to promote a more democratic form of governance. In 1965, he set up a Royal Advisory Council, and in 1968 he formed a Cabinet. In 1971, Bhutan was admitted to the United Nations, having held observer status for three years. In July 1972, Jigme Singye Wangchuck ascended to the throne at the age of 16 after the death of his father, Dorji Wangchuck.

In 1998, King Jigme Singye Wangchuck introduced significant political reforms, transferring most of his powers to the Prime Minister and allowing for impeachment of the King by a two-thirds majority of the National Assembly. In late 2003, the Bhutanese army successfully launched a large-scale operation to flush out anti-India insurgents who were operating training camps in southern Bhutan.

In 1999, the king also lifted a ban on television and the Internet, making Bhutan one of the last countries to introduce television. In his speech, the king said that television was a critical step to the modernization of Bhutan as well as a major contributor to the country’s Gross National Happiness (Bhutan is the only country to measure happiness) but warned against the misuse of television which may erode traditional Bhutanese values.

A new constitution was presented in early 2005 which will be put up for ratification by a referendum before coming into force. In December 2005, Jigme Singye Wangchuck announced that he would abdicate the throne in his son’s favour in 2008 . On December 14, 2006, he stunned his countrymen by announcing that he would be abdicating immediately.