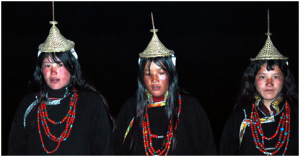 Bhutan has the richest and one of world’s finest cultural heritage that has largely remained intact due to its isolation from the rest of the world till early 1960s. One of the main attractions of the tourists in Bhutan is culture and its traditions. the government is increasingly making efforts to sustain the current culture and tradition and Bhutan has aptly been referred to as the ‘Last Shangrila’.

While the Bhutanese are free to travel abroad, Bhutan is seen to be inaccessible to foreigners. There is a widespread misperception that Bhutan has set limits on tourist visas. The high tourist tariff and the requirement to go on packaged tours may have created this impression.

The traditional dress for Ngalong and Sharchop men is the gho, a knee-length robe tied at the waist by a cloth belt known as the kera. Women wear an ankle-length dress, the kira, which is clipped at one shoulder and tied at the waist. An accompaniment to the kira is a long-sleeved blouse, the toego, which is worn underneath the outer layer. Social status and class determine the texture, colours, and decorations that embellish the garments. Scarves and shawls are also indicators of social standings, as Bhutan has traditionally been a feudal society. Earrings are worn by females. Controversially, Bhutanese law now requires all Bhutanese citizens to wear these garments in public.

Rice, and increasingly maize, are the staple foods of the country. The diet in the hills also includes chickens, yaks, cows and sheep. Soups of meat, rice, and dried vegetables spiced with chillies and cheese are a favourite meal during the cold seasons. Dairy foods, particularly butter and cheese from yaks and cows, are also popular, and indeed almost all milk is turned to butter and cheese. Popular beverages include butter tea, tea, locally brewed rice wine and beer. Bhutan is the only country in the world to have banned the sale of tobacco.

Bhutan’s national sport is archery, and competitions are held regularly in most villages. It differs from Olympic standards not only in technical details such as the placement of the targets and atmosphere. There are two targets placed over 100 metres apart and teams shoot from one end of the field to the other. Each member of the team shoots two arrows per round. Traditional Bhutanese archery is a social event and competitions are organized between villages, towns, and amateur teams. There are usually plenty of food and drink complete with singing and dancing. Wives and supporters of the participating teams cheer. Attempts to distract an opponent include standing around the target and making fun of the shooter’s ability. Darts (khuru) is an equally popular outdoor team sport, in which heavy wooden darts pointed with a 10 cm nail are thrown at a paperback-sized target ten to twenty metres away.