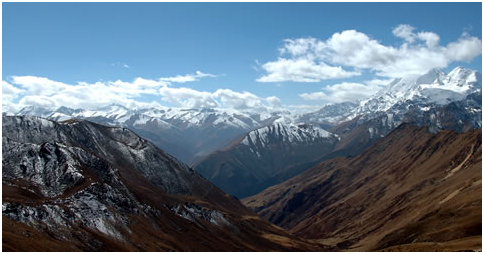 The northern region consists of an arc of glaciated mountain peaks with an extremely cold climate at the highest elevations. Most peaks in the north are over 23,000 feet (7,000 m) above sea level; the highest point is claimed to be the Kula Kangri, at 24,780 feet (7,553 m), but detailed topographic studies claim Kula Kangri is wholly in Tibet and modern Chinese measurements claim that Gangkhar Puensum, which has the distinction of being the highest unclimbed mountain in the world, is higher at 24,835 feet (7,570 m). Watered by snow-fed rivers, alpine valleys in this region provide pasture for livestock, tended by a sparse population of migratory shepherds.

The Black Mountains in central Bhutan form a watershed between two major river systems: the Mo Chhu and the Drangme Chhu. Peaks in the Black Mountains range between 4,900 feet and 8,900 feet (1,500 m and 2,700 m) above sea level, and fast-flowing rivers have carved out deep gorges in the lower mountain areas. Woodlands of the central region provide most of Bhutan’s forest production. The Torsa, Raidak, Sankosh, and Manas are the main rivers of Bhutan, flowing through this region. Most of the population lives in the central highlands.

In the south, the Shiwalik Hills are covered with dense, deciduous forests, alluvial lowland river valleys, and mountains up to around 4,900 feet (1,500 m) above sea level. The foothills descend into the subtropical Duars plain. Most of the Duars is located in India, although a 6–9 mile (10–15 km) wide strip extends into Bhutan. The Bhutan Duars is divided into two parts: the northern and the southern Duars. The northern Duars, which abuts the Himalayan foothills, has rugged, sloping terrain and dry, porous soil with dense vegetation and abundant wildlife. The southern Duars has moderately fertile soil, heavy savannah grass, dense, mixed jungle, and freshwater springs. Mountain rivers, fed by either the melting snow or the monsoon rains, empty into the Brahmaputra river in India. Data released by the Ministry of agriculture showed that the country had a forest cover of 64% as of October 2005.

The climate in Bhutan varies with altitude, from subtropical in the south to temperate in the highlands and polar-type climate, with year-round snow, in the north. Bhutan experiences five distinct seasons: summer, monsoon, autumn, winter and spring. Western Bhutan has the heavier monsoon rains; southern Bhutan has hot humid summers and cool winters; central and eastern Bhutan is temperate and drier than the west with warm summers and cool winters.