This spectacular 30-day adventure in Bhutan begins with the 25-day Snowman trek into one of the country’s most remote valleys. This is probably one of the hardest high altitude treks, but an incredible experience for anyone who takes the challenge. Bhutan’s pristine landscape, wonderful people and fascinating Buddhist culture provide the ingredients for a memorable journey into one of the world’s most remote kingdoms.
Traveling into the Lunana district the Snowman trek is so named for the six mountains over 7000 meters (23,100 ft. ) which the trek passes beneath. Crossing nine passes over 4500m (15,850 ft. ) makes this not only one of the highest altitude treks, but also one of the most challenging. Starting in Drukgyel Dzong after a short drive from Paro, we will set out heading directly towards Jhomolhari at 7314m (24,135 ft. ) the third highest peak in Bhutan. Following the Paro Chhu river valley up into the mountains will be a prelude to the magnificent high altitude trekking which follows. Passing Buddhist monasteries and small villages we will witness a land unchanged for hundreds of years. By placing a strong emphasis on preserving its natural and cultural history, Bhutan has an aura of authenticity which engages your heart and mind while trekking. Glide past blue pine, juniper and rhododendron forests, and look for the famous Himalayan blue sheep, bearded vultures and Himalayan griffons flying overhead.
After a strenuous but tremendously rewarding 25 days of trekking we will turn our attention to learning more about Bhutan’s cultural heritage and Buddhist traditions as we return by road across the middle of Bhutan, known as the Inner Himalaya, visiting Punakha, and Thimphu, before returning to Paro for our final night.

Arrive Paro by Druk Air Airbus 319 jet, the national carrier. The flight offers you beautiful views of mountains on your approach. On arrival and after visa formalities you will be received by our representatives and transferred to your very comfortable hotel.
In the afternoon you will have the opportunity to explore Paro town a little and visit Paro Dzong. A Dzong is part fortress, part castle, part monastery and part administration building. Paro Dzong is one of Bhutan’s most impressive and well-known dzongs, and the finest example of Bhutanese architecture we’ll see. The inward-sloping walls form a massive structure that towers over the town and is visible as a great white monolith from vantage points throughout the valley. Paro is at 2280 metres (7500 ft).

Day hike to Taktsang monastery, the famous “Tiger’s Nest”. Horses can be arranged for an extra $5 usd. The hike which is all up hill takes about 2 /3 hours through villages and pine forests. The monastery which clings to a huge granite cliff 800 meters above the Paro valley was devastated by fire in 1998 but the Royal Government has taken immediate steps to restore the monastery to its original structure. It is believed that the Buddhist saint Padmasambhava came in the 7th century on a flying tigress and meditated in a cave for 3 months. The demons were subdued who were trying to stop the spread of Buddhism and converted the Paro valley to Buddhism. During the end of the 17 century, a monastery was built on the spot where the saint meditated and it is a pilgrimage site for every Bhutanese to visit once in their life time. Stroll back to hotel.

Distance: 17km – 5 to 6 hours
A short drive from Paro takes us to Drukgyel Dzong, and the start of our trekking route. Heading up the Paro Chhu river valley, the trail passes the small settlements of Chang Zampa and Mitshi Zampa where we will see excellent examples of Bhutanese farmhouses. We camp at Sharna (2800m / 9200 feet).

Distance: 22km – 7 to 8 hours
Leaving Sharna the trail continues upriver and the route winds in and out of rhododendron and blue pine forests. When we enter Jigme Dorji National Park keep your eyes open for wildlife and changes in vegetation as we continue to climb in elevation. Tonight we camp in Thangkthanka (3520m / 11545 ft. )

The first of our acclimatization days, we have many day-hiking options. The first is a three to four hour excursion up the ridge to the north for great views of Jichu Drake. The second is to hike up towards the head of the valley in the direction of Jhomolhari. The third is a trek up the main valley towards the last house and onward toward Jichu Drake, this gives a great view of where we will be going in the next few days. The final alternative is a fishing expedition to Tshophu, a high-altitude lake about a two hour hike away.

Distance: 20km – 6 to 7 hours
Heading uphill from Jangothang we cross the first of many major passes. The Nyile La pass at 4890m (16,135 ft) is about a four hour ascent. Descending the other side we will encounter sparce juniper and rhododendron and pass many yak herder camps. From this area on we start to see herds of blue sheep. Arriving in Lingshi we set up camp at 4150m (13,700 ft).

Distance: 14km – 4 to 5 hours
This morning we will visit Lingshi Dzong, also known as Yugyel Dzong in the 17th century, it was used in the past to control travel between Tibet and Bhutan. Since today’s hike will not be as long, the pace will be more relaxed. Upon reaching the camp at Chebisa (3850m / 12,600 ft), we will have time to visit Chebisa village and see a slice of Bhutanese village life.

Distance: 10km – 4 to 5 hours
A shorter hike follows a trail in and out of a heavily wooded, uninhabited valley. Climbing up out of the forests we will be rewarded with some great views of Gangchhenta and Masang Gang (7165m) mountains. We camp at Laya at 3840m (12,650 ft).

Staying in Laya for the day we will get a chance to see the village with its community school, hospital, archery field and the first shop since the Paro Valley. Laya is a unique village of about 800 people with their own language, customs and distinct dress. The women keep their hair long and wear peculiar conical bamboo hats with a bamboo spike at the top. They wear a lot of silver jewellery on their backs, on many women this display includes an array of teaspoons.

Distance: 19km – 6 to 7 hours
The trek leads gradually downhill to the Lunana trail junction, then makes a gradual climb to the camp through a forest of conifers, maple and rhododendron. The trail improves and becomes wider as we climb out of the river valley. We camp at Rodufu near a small stream at 4160m (13,645 ft).

Distance: 15km – 5 to 6 hours
The walk leads down through conifer forests, following the upper reaches of the Pho Chhu river. The trail then climbs over a ridge and drops to the village of Woche at 3940m (13,000 ft). The trek has now entered the Lunana region.

Distance: 19km – 6 to 7 hours
The trail climbs gradually following the main source of the Pho Chhu to Chozo village. At the small Chozo Dzong there are some lay monks. Above Chozo the valley opens as we approach Thanza village near the foot of 7100m Zogophu Gamp, which is also know as Table Mountain. We camp at Thanza, 4080m (13,300 ft).

This day is a fantastic opportunity to interact with the hospitable local villagers, and explore the beautiful surrounding area, our farthest point in the Lunana valley. Alternatively you can relax around camp and rest up for some of the tough days ahead. As Thanza is a transfer point for horses and yaks, it is important to have a day here for our staff to ensure all the necessary yaks are rounded up by the local herders who do not operate on ‘Western time’!

Distance: 8km – 4 hours
Today is a relatively short, although somewhat steep, climb to a campsite called Danji, part way up to the Jaze la pass. It will allow us to have some extra time in the morning and make a later start. The camp is around 4600m/15,000ft, with spectacular views of snow-capped peaks! It is an important acclimatization spot.

Distance: 23km – 7 to 8 hours
A long final day of trekking will descend through the lovely village of Sephu to finish at Nikachu Chazam, the road head. From there we will drive to a comfortable guest house near Trongsa. This beautiful Dzong is the centre of the region of Bhutan called “Bumthang” (central region). The Trongsa Dzong is the most impressive in the kingdom and can be see from a great distance in its strategic position high above the Mangde Chhu river.
Drive from Trongsa to Punakha. (Approximately 3 hours) In the mid-afternoon, there is a spectacular drive back west across the mountains to Punakha. We will probably stop along the way at Chendebji to visit the Chendebji Chorten, patterned after Swayambhunath in Kathmandu and built in the 19th century by Lama Shida from Tibet. We may also stop at the top of the Pele La pass (3400m). Overnight in Punakha at a very comfortable hotel.

We will have time in the morning to see Punakha Dzong (the second of Bhutan’s dzongs to be built) which for many years served as the seat of government. The dzong was first built in 1637 and is still one of the largest in Bhutan. We will drive to Thimphu in the morning (about 2 hours) and have the afternoon to visit Thimphu, the capital of Bhutan. We will visit the Trashi Chhoe Dzong, built as the symbol of the capital and then explore the shops along Norzin Lam, Thimphu’s main street.

The morning is free to do some more sightseeing or shopping around Thimphu. In the afternoon we take a 2 hour drive through the lovely central foothills to Paro where we will overnight in a comfortable hotel.

Waking up in Paro, we’ll have time for one last walk through town before saying our goodbyes and heading to the airport for the Druk Air flight to Bangkok. 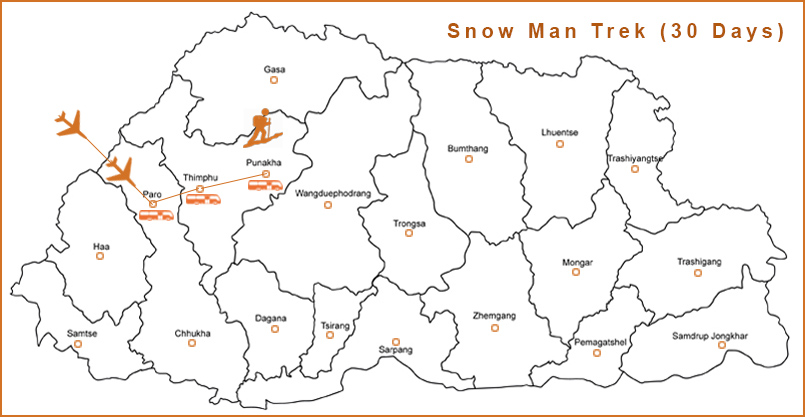